In Conversation with… Garry Ratcliffe

I was extremely excited and felt honoured that Garry Ratcliffe, CEO and Executive Headteacher of The Galaxy Trust (a Multi Academy Trust of 3 Primary Schools in Dartford) agreed to join me for one of our special ‘In Conversation With…’ recordings as part of the celebrations for the LGBTQIA+ Early Years first Awareness Week.

Note: You can click on the small square with outward pointing arrows in the bottom right-hand corner to watch this clip in full screen

Listen to Garry!
You can download the file by clicking on the downward facing arrow (↓) to the far right

I had first encountered Garry as part of my work with Laura Henry-Allain MBE, supporting her annual ‘My Family Week’; Garry and his family were one of the subjects for Laura’s Family Love Stories, and after listening to it, I was in awe! So I plucked up the courage to approach him and the rest they say, is history.

In our conversation, Garry shared so much of himself, how he met his husband Kyle, why the chose to adopt, all about his children, his work and how he promotes inclusion and diversity in his schools plus how we works with the schools that his children attend.

About Garry Ratcliffe … and his family!

Garry is the CEO and Executive Headteacher of The Galaxy Trust, a Multi Academy Trust of 3 (soon to be 4!) Primary Schools in Dartford. Having been a Headteacher for 15 years and a teacher for 25 years, he has a passion for improving the lives of all children. “Every child deserves equality of opportunity, whether they are from the most privileged family, or they live in the most deprived conditions. It is my mission to improve life chances for all children within my schools, and within the charities that I support.” 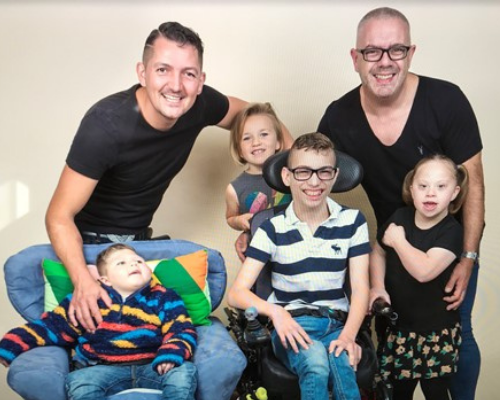 Garry is married to Kyle and they have four amazing children, three of whom have special needs / additional needs and disabilities, not that this any way stops the love, fun, laughter and adventures!

Kyle is the head of a children’s charity called Curly’s Legacy which provides memory-making holidays for vulnerable families as well as managing Curly’s Farm, a small working farm set in ten acres of gorgeous Kent countryside on the Isle of Sheppey and currently works with a large number of primary and secondary schools, as well as Home Educated children, charities and residential units, enabling that their children and adults to access the farm each week.